You are here: Home » Cruisin’ Michigan

The Michigan Avenue Cruise of July 12, 2008 may have been the first multi-city cruise along Michigan Avenue, but it was not the first auto event for Don Nicholson. Don originally got involved with cars racing at Detroit Dragway and Milan Dragway back in the middle 1980’s. 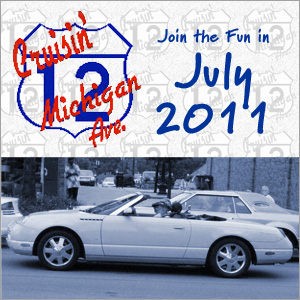 Don began his involvement with the track car shows and doing event photography for Milan Dragway in the early 1990’s. After gaining experience at Milan doing car shows he started the Burger Car show in Garden City, which is now known as “Autos For Autism.”

In 2001 Don began the Don Nicholson Charity Car Shows. The first show was held at the Automotive Hall of Fame in Dearborn. The main show each year is now held at the Western Wayne Skill Center in Westland on the last Monday in June. This school teaches life skills and job training for special needs young adults.

The Don Nicholson Charity Car show grew to two events in 2007. The second show of the season was a charity show to help raise money to restore and rebuild the Historic Wayne Theatre. Unfortunately this show suffered a rain-out.

In August 2007 Don came up with the idea for the Michigan Avenue Cruise. As usual, Don looked at ways to use the event to help non-profit groups. Event planning was incorporated with the help of the local cities and chambers of commerce.

Visit our website to learn more about the Cruise! Photos, sponsorship opportunities, and more! Cruise with us on July 9th, 2011!