You are here: Home » Frank B. Ford – Attorney

Frank B. Ford appears in courts throughout the Detroit and Southeast Michigan area, representing persons accused of drunk driving. Your ticket or bond receipt may say OWI, OUIL, UBAL, UBAC, Per se, or OWVI. You may call it DUI, or DWI, or DUIL. You may have been arrested in Dearborn, Detroit, Allen Park, Woodhaven, or Grosse Pointe Woods. They may have stopped you in Northville, Ann Arbor, Monroe, Taylor, Romulus, or Novi. It all comes down to this: YOU’VE GOT A SERIOUS PROBLEM. You’ve been charged with a crime. That charge can take your driver’s license. It can put you in jail. It can cost you years of extra insurance premiums and driver responsibility fees, not to mention fines and court costs. It can take away your CDL (Commercial Driver’s License). It can put you on probation for years. 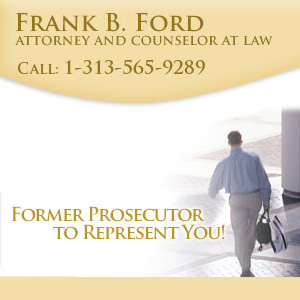 Frank B. Ford has been a practicing attorney for thirty years, and has focused on drunk driving cases and driver’s license restorations for almost all of that time. The national concern about drunk driving is justifiable, but YOU ARE ENTITLED TO A FULL AND VIGOROUS DEFENSE. Just because you are accused, doesn’t mean you are guilty, and it certainly doesn’t mean the prosecutor can prove you guilty!

As a former prosecutor for both the City of Dearborn Heights, in Wayne County, and for the City of Troy, in Oakland County, Frank B. Ford has seen the Michigan drunk driving law from both sides. He says, “If you’ve got a defense, I will probably recognize it, because it was probably used against me while I was a prosecutor.” In addition to his five years of experience prosecuting drunk driving cases, Mr. Ford has attended specialized seminars on drunk driving defense presented by the National Association of Criminal Defense Lawyers, of which he is a member, the Minnesota Society for Criminal Justice, and the Michigan Institute for Continuing Legal Education, in Ann Arbor. He has been defending against drunk driving charges from his present location in Dearborn Heights, outside of Detroit, for over twenty years. He travels throughout southeast Michigan, to district and circuit courts. He also appears at the Secretary of State Driver License Appeal Division (DLAD), also called Driver Assessment and Appeal Division (DAAD), on driver’s license restoration hearings and implied consent hearings.